Mozilla Festival 2014: Building the Web of the Future

Community leadership and Upscience on the agenda at Mozfest 2014

Cover photo by Mozilla in Europe

This weekend saw London host the 5th annual Mozilla Festival, a three-day web event that brings together technology-enthusiasts from across the globe to create and energise online communities. Attendees are invited to “arrive with an idea, demo or hack on innovative digital solutions, to bring a pragmatic approach to solving real problems, and to forge new collaborations to tackle pressing issues on the web.” Most importantly, Mozfest is about communicating, exchanging ideas and forming communities.

The event was hosted on the banks of the River Thames at Ravensbourne, an eccentric 9-floor building which provided the perfect venue for this dynamic, creative and quirky festival. Each floor hosted a different ‘track’ or theme, which included Community Building, Policy & Advocacy, Musicians on the Open Web, Source Code for Journalism, and Build & Teach the Web. Facilitators led sessions in open spaces (patrolled by scarily enthusiastic ‘space wranglers’) where they introduced attendees to their area of expertise, chaired debates or supervised ‘sprints’ – hands-on workshops where people collaborate to build innovative web-based tools in under three hours. 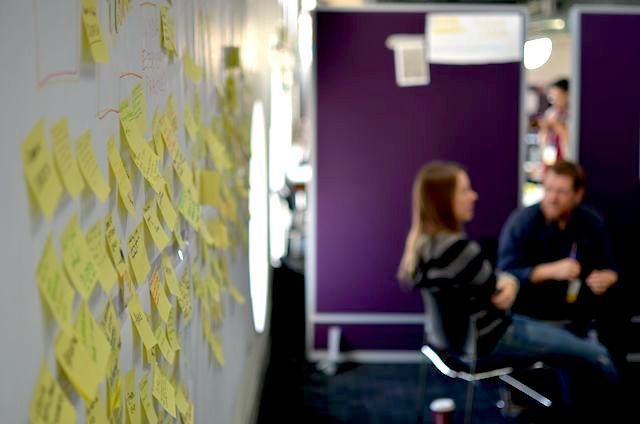 Floor 7 hosted the ‘Science and the Web’ track and an open session on ‘Upscience’. Francois Grey (Citizen Cyberscience Centre) introduced the Upscience philosophy, which encourages individuals with an interest in science to define, initiate and carry out their own research projects. The PyBossa team introduced Crowdcrafting as a tool which empowers people to become citizen scientists and discussed the exciting Cities at Night project. Cobi Smith described how GeotagX uses PyBossa software to help with humanitarian disaster response, while Nick Johnson outlined how he is using Crowdcrafting to study landfill sites in the US. Session participants then joined the teams to work on new projects. 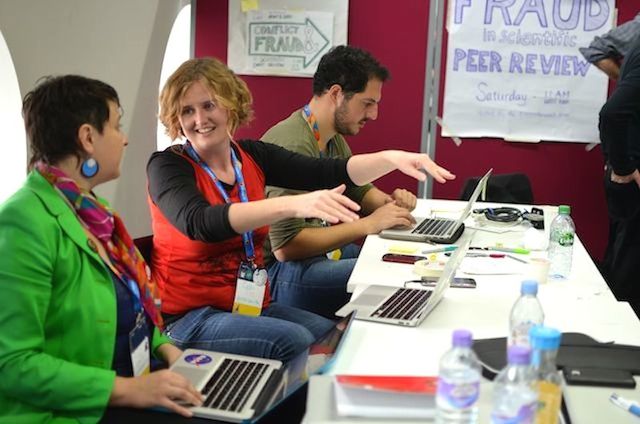 Photo by James Doherty Cobi Smith of GeotagX brainstorming with participants at the Upscience session.

A central theme of this year’s festival was developing best practices for community leadership. Mozilla’s Executive Director, Mark Surman, argued that we are at a key juncture in human history as we shape the web for centuries to come. And with billions of new web users set to come online over the next few years, he posed the question: How do we shape and grow the web we want? Concerns around online privacy were passionately debated: Raegan McDonald of Access argued that our personal data has become the currency of the internet. She suggested that individuals should be prepared to pay for services which better safeguard their data. Filmmaker Beeban Kidron delivered a thought-provoking keynote speech on how the web is the only place in society where children do not enjoy a special status, and that the online community has a duty of care to build a safer web where children can grow up safely online.

The festival was not just about talking and listening but also doing, making and engaging people with technology. (In fact, Mozilla were so keen to engage people with technology that they distributed free Firefox OS smartphones to festival attendees!) Margaret Gold and Brian Fuchs of Citizen Cyberlab led a session where participants used Mozilla’s Appmaker to build applications for monitoring pollution. The Particle Clicker team (winners of the CERN webfest) began construction of a new particle detector game, while the musicians of Cheapsynth used Arduino and old Playstation instruments to make groovy music. And all the while the kids on the 9th floor built a whole new world in Minecraft. 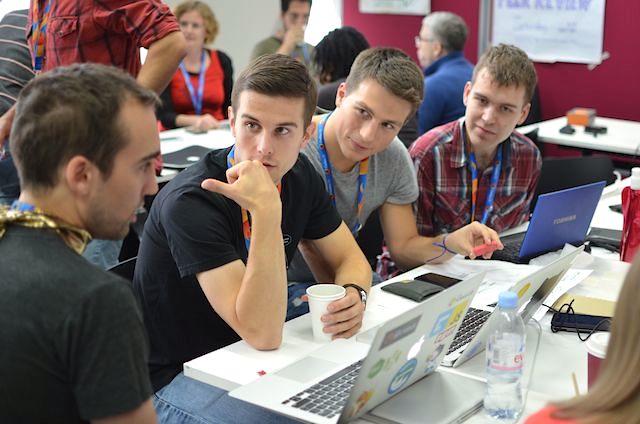 Around 1,700 people attend the Mozilla Festival each year with each of those enjoying their own unique experience. There are so many sessions, so many people, so many workshops, so many ideas written on post-it notes and stuck to the walls, that one’s head spins. The tone of the event is set by its charismatic MC Allen “Gunner” Gunn: It’s full of life, it’s loud, it’s in your face, it’s disorientating, it’s overwhelming. But it’s also highly principled, ambitious and passionate. And as the final post-it note is peeled from the walls of Ravensbourne, you can only imagine how the seeds sown over the course of the festival might bloom. 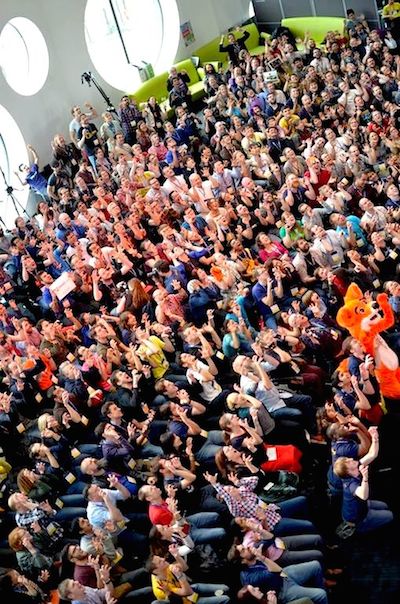 You’ve been appointed PyBossa’s new Community Manager, how do you feel? I....