Nicolas Maire of the Swiss Tropical and Public Health Institute tells James Doherty how his team is using Crowdcrafting.org to help fight Malaria in Africa.

So what is Rural Geolocator?

Rural Geolocator is a project hosted by Crowdcrafting which asks the public to identify houses in satellite images, currently of two locations in Africa: Rusinga Island in Lake Victoria, Kenya and Majete Wildlife Reserve in Malawi.

Why is that useful?

Field teams trying to stop the spread of Malaria need to deliver technologies and advice to indigenous populations to prevent them from contracting the disease. To deliver these tools, the teams need to know where people live. While they try their best to visit everyone, inevitably they miss some people out who, perhaps, live in remote areas which are difficult to access. Rural Geolocator helps to ensure that the field teams can visit everyone in a particular district.

How did a Swiss scientist get involved with fighting Malaria in far-flung Africa?

I work for the Swiss Tropical and Public Health Institute, an associated institute of the University of Basel. We set up Health Demographic Surveillance Systems (HDSS) to intensively survey populations for which there is no routine registration of births and deaths. We try to enumerate these populations and understand the healthcare challenges they face. 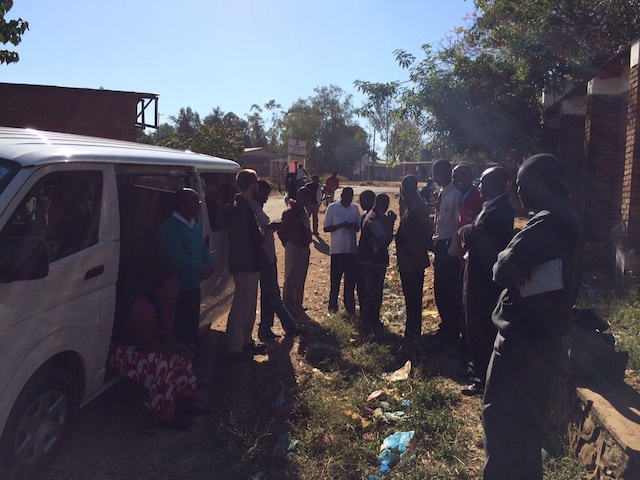 Photo by Nicolas Maire HDSS enumerator team getting ready for a field survey in Majete, Malawi.

Teams investigating the effect of Malaria on populations in Africa realised that the data we collect would be really useful for their research – so they got in touch to ask for our help.

What techniques are the field teams using to fight Malaria?

On Rusinga Island they install solar-powered mosquito traps outside people’s houses. Odour baits within the traps mimic the smell of humans and catch mosquitoes before they go indoors. The intervention begins at one randomly selected house and expands radially until a cluster of houses with the intervention is created. Other clusters are created until all houses on the island have traps installed.

In Majete they use a variety of techniques, including sealing houses with insect screens, using biological agents to treat stagnant water which provides a breeding ground for mosquitoes, and using the ‘roll-back’ technique: A combination of mosquito nets and medication.

We need help to analyse thousands of satellite images (imported from Bing) to locate structures where people might live. There is a diverse range of possibilities of what constitutes a ‘potentially inhabitable structure’ that only the human brain can interpret. We couldn’t use computer algorithms for these tasks.

An unexpected bonus of using Crowdcrafting has been the outreach achieved – lots more people know about the research projects because we’ve crowdsourced the data.

Photo by Nicolas Maire Geolocators at the Open Day of the Swiss TPH in June 2014.

What does the future hold for Rural Geolocator?

Our volunteers have already invested a lot of time and effort collecting data sets for the Rusinga and Majete projects so the first thing to do is analyse them. We will create maps of potentially inhabitable structures to overlay maps of houses visited by the field teams which will help to identify missed households. Ultimately we hope that using satellite imagery and crowdsourcing will greatly improve our data to guide both field research and the implementation of malaria control measures.