Join the dots to measure antimatter

Does antimatter fall up or down? We don’t know for sure but Dr Michael Doser and his team at CERN – the world’s leading particle physics laboratory in Geneva, Switzerland – are trying to figure it out. And they need your help…

The observable universe (including you) is composed almost entirely of matter but we can produce stuff called antimatter in the laboratory. Antimatter is material composed of antiparticles which have the same mass as normal matter particles but the opposite electric charge. When an antiparticle collides with a normal matter particle they both annihilate – producing a burst of other particles and radiation. Scientists don’t know how antimatter interacts with gravity.

The AEgIS experiment will shoot antimatter atoms horizontally – whereupon they will fly and fall – at a wall made of matter. On hitting the wall, the antimatter will annihilate with a matter nucleus, producing a burst of light particles (known as pions) and some heavier particles. These particles will travel through a special gel (known as an emulsion) behind the wall which makes their tracks visible. Pions leave thin tracks and heavier particles leave fat tracks. 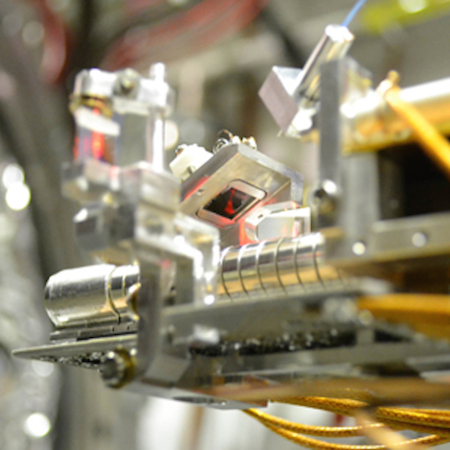 Photo by AEgIS, CERN Part of the AEgIS experiment at CERN.

Tracing these tracks to their point of origin will tell the AEgIS team exactly where the annihilation occurred which, in turn, will allow them to calculate how far each antiparticle travels. They will then be able to work out – from the distance each particle flies and falls – how antimatter interacts with gravity. Simple!?

The team is currently calibrating the experiment so, if you want to get involved, your first task will be to them team pick the most effective kinds of emulsion and particles for the experiment. Then later you will be able to analyse the actual experimental data!

… should you choose to accept it, is to identify particle tracks through the emulsion. It’s as easy as joining the dots! You can also let the AEgIS team know if you can spot and count the individual grains making up particle tracks. This helps them tell if the particle is a pion or heavier particle. You might also be really lucky and spot an annihilation point from which lots of particles burst. Be sure to label that too. There’s a handy project tutorial to show you how to carry out these tasks and the input you provide is instantly shown on a jazzy 3D model.

It’s not every day that you have the opportunity to help design an experiment at CERN then analyse its data. So don’t delay, contribute today at Antimatter Alpha Project!

We admit it – computers are getting pretty clever. They can calculate pi t....

3 steps to build a successful team

How do you build a successful team? Moreover, how do you do it when you do....